Wing-Chun Kung-Fu is a martial art that originates from a small town called Fatshan in Southern China. Wing Chun finds it origin in the 17th century in the old Shaolin Temple in Hunan, China. During an attack by the emperor which was aimed to destroy the (unfairly) feared temple, a few monks and 1 nun, Ng Mui, managed to escape. Watching a fight between a crane bird and a snake led her to extending her knowledge of the martial art and moulding it into a comprehensive system. Originally the system was called “Orthodox Shao Lin”. This was later renamed after her only student, Yim Wing Chun.

Yim Wing Chun was suppressed by a bully from China who demanded to marry her because he desired her beauty. As she refused, the bully came with a proposal; a fight between them. To be able to gain victory over the bully, she needed a system that did not depend on brute force. Ng Mui showed the power of Wing Chun to Yim Wing Chun to later transfer the system to her in a very short time span. Of course the bully lost. To ensure that the Wing Chun system would not be lost, Yim Wing Chun passed the system on to her husband, Wong Wah Bo. At this time, Wing Chun was a very secret system due to its multiple times proven effectiveness. From that moment on, the Wing Chun system has been passed on from generation to generation. Please see the Family Tree for the complete overview. 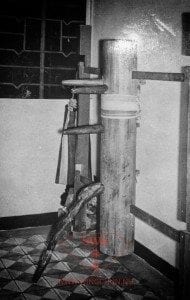