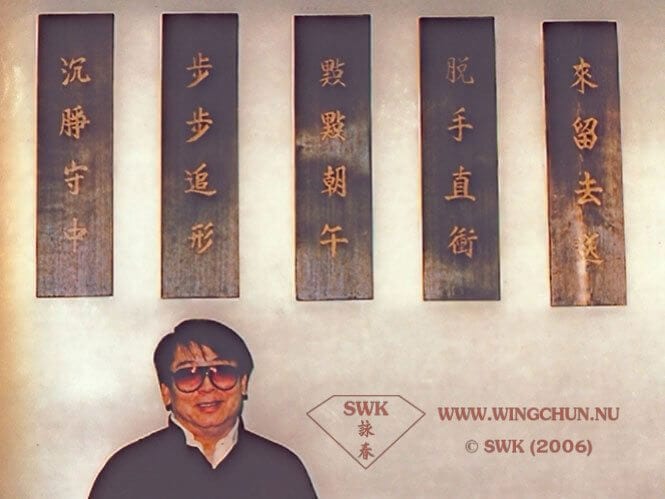 The “Kun Kut” is a collection of 5 principles, also known as the recurring rules of the Wing Chun fist. When all these 5 principles are applied at all times during a combat, or training situation, one will realise how well Wing Chun is actually built up. These rules actually give guidance on how to make use of your arms, legs and body in any situation and will ensure you will always have the upper hand in combat. In the end, these principles are much more important than the individual techniques, because they will allow you to improvise during new or unfamiliar occurrences. As the saying goes: ”Give the man a fish and feed him for a day, teach him how to fish and feed him for a lifetime.”

To enable you to fully understand these principles they are described below:

This principle also ensures that you will be attacking and defending simultaneously. You will not allow a second attack to come at you without you acting pre-emptively. On the contrary, you will absorb the attack by taking the initiative and attacking yourself.

This can be compared to constricting snake, which chokes its prey. With every exhale of the prey, the snake pulls tighter and in this way prevents the prey from breathing in again. The correctly applying of this principle make sure that the attacks of the opponent are actually stopped before they can be completed. This is important when you have to defend yourself as the weaker party against the stronger party. By intercepting and smothering the attack the stronger party will be unable to use its full force.
This principle also depicts the attacking character of Wing Chun. After stopping an attack one does not stay passive, but actively takes the initiative and attacks himself.

It is vital to understand that making contact with the opponent is not the goal one is trying to achieve. Keeping contact is a passive stance, one would want to attack and conquer the other as quickly as possible. This can only be achieved by applying pressure towards the middle/centre and by not chasing the hands of the opponent continuously. The first principle is closely related to the second principle: Teut Sao Tjik Chung.

Translated: In case of no contact with the hand, rush straight forward.

Teut Sao Tjik Chung can be compared to the mechanics of an elastic band. When you look at your hands (or anything with which you can attack really) as 2 stretched elastic bands and release these when they are unobstructed by the hand or another part of the body of the opponent, they will rush forward. This means that any time that one of both hands is idly floating in the air during a fight or training, you are not applying this principle correctly. There is therefore no moment of rest (just like with the first principle) during a fight for a Wing Chun practitioner.

Again, both attack and defence are executed simultaneously. It is pointless to wait after you have countered the first attack. You will have to take the initiative and attack the opponent. This principle is almost identical to the first principle. The difference is that in fact nothing has to be stopped. No contact? Attack!

Teut Sao Tjik Chung teaches us that if there is no contact, one rushes forward and attacks. Wing Chun again obtains its attacking and aggressive character. A Wing Chun practitioner does not await an attack passively, but will move forward and attack himself. This way he will gain the initiative and will force the other to react to his attack. In case one encounters an attack of the opponent, one will counter and will then immediately proceed to attacking. It is futile to wait for the next attack and subsequently stop the attack again. No, gain the initiative and switch roles!

It is important to consider the following with the second principle; moving forward when there is no contact, does not equal blindly rushing forward for the Wing Chun practitioner. The rushing forward will only be effective in case one is within reaching distance, or when the distance to the opponent can be closed by taking only one step. The distance meant here is the one to the final goal; the head or body of the opponent, not the arms. Therefore never punch in the air when executing chain punching. Every punch should therefore be considered as if having the ability to hit the target in the bulls eye with as much effectiveness applied as possible.

The goals is to attack the opponent and to eliminate the threat, the advancing is not a goal on itself!

Translated: Every point faces the centre

The first two principles describe the interaction with the opponent, being the mental approach of a fight.

Dim Dim Chiu Ng shows where all techniques should be aimed at. Dim translates into ‘point’, and the double words dim dim depict that is about every point.

Ng is the centre, in other words the shadow, or the target. Wherever the opponent may move, one will keep facing him and will never turn his back to an opponent. This does not only consider attacks with the hand and fist, but for any natural body weaponry. When the opponent blocks an attack and continues to keep the hand under control, it is often possible to continue the attack with another ‘section’ of the arm, such as the elbow or shoulder.

By taking the shortest route to the middle/centre, with all weapons of the body possible, the Wing Chun practitioner becomes a kind of ‘hydra’. The hydra is a multi-headed monster in Greek mythology with which two new heads appear every time one has been cut off. Just as it is with Wing Chun, a blocked attack will often open a door for a multitude of further attacks. Sifu Wang Kiu was often called the man with the 8 arms, because an attack was always approaching the opponent, no matter what was tried to intercept them.

Translated: Every step chases the opponent.

This principle is almost identical to the previous principle Dim Dim Chiu Ng. The difference being that Dim Dim Chiu Ng depicts that all points have to be aimed at the middle/centre, and that Bou Bou Cheui Ying adds to this that one keeps chasing the opponent with all attacks executed. It does not matter if the opponent attacks or not, charge and attack!

Translated: Sink the elbow and attack through the middle.

The fifth principle is really the most distinctive for the physical structure of the techniques of Wing Chun. By sinking (Cham)/lowering the elbow (Tsiang) and attacking through the middle (Chong) with the hand (Sao) an attack is developed which will also be a block due to its wedged shape.

The sinking of the elbow will also determines the fact that a vertical fist has to be used. Due to this the bottom three knuckles are used (only the pinkie knuckle really) as point of contact, which physiologically is the strongest structure to transfer power. In a neutral position, the low elbow guarantees the protection of the body.